The ‘EISENBERG V8’ (EV8)
Possibly the world’s most extreme motorbike ever!

Rewriting the book on extreme motorbikes…

Very few engines evoke more feelings of power, sound and emotion than a V8. EISENBERG Racing have pushed the boundaries of madness, by creating an extreme V8 for our most serious project to date. The worlds most ‘powerful and compact ‘production’ V8 motorbike ever made.

The special V8 engine has been designed in conjunction with some of the top engine designers in the UK to our special requirements. The V8 engine only weighs 80kg and is will be capable of producing 480-500hp in race spec at 10,500rpm when running race fuel 116 octane or E85. In road trim, running pump fuel, power will be over 400hp to 480hp, according to fuel map.

The V8 engine has been designed to work and fit within a motorbike, as opposed to building a motorbike around a large V8 American muscle car engine, with all the poor handling and weight issues that creates. This bike will be designed without limitations or budget to create a genuine modern day muscle bike, with ‘normal’ weight, length and height. 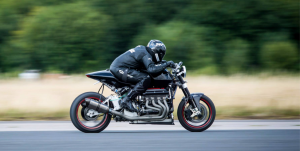 So, how did we package such a small V8 into a motorbike? Most car V8’s, the ones you associate with ‘American muscle cars’ are a simple crossplane crankshaft design, which gives the typical ‘chevy v8’ burble, due to it’s uneven exhaust pulses. They are also much heavier and bulky by design due to a heavy balance shaft. True light weight race bred V8’s generally have a flatplane crankshaft, which gives perfectly even exhaust pulses – like a Ferrari V8. Flatplane V8’s can rev much higher and easier (often double that of your typical burbly Chevy V8), meaning more HP from less cc (torque x rpm)/5252 = HP. Flatplane V8’s don’t burble, they scream, like an F1 car or Ferrari (also flatplane V8). A flatplane V8 is a more freely revving engine which is lighter, smaller and better primary balanced. But we didn’t stop there.

Eisenberg worked closely with Ted Hurell of RPE and Steve Prentice who were responsible for the designed the original famous ‘twin hayabusa V8’ engine. Numerous adaptations were made to create a 3000cc V8 engine using bored and stroked Hayabusa heads with a complete bespoke sand cast block, crank case, crank, connector rods, pistons and far more… For the race version and to make it sound really great, the bike is fitted with eight independent fly by wire, throttle bodies (ITB) with tuned trumpet lengths to give the best possible airflow and throttle response, which gives a highly responsive motorbike. Customers may prefer the dual throttle body, fixed plenum airbox for a less dramatic throttle response and lower idle rpm.

The EV8 project has been 4 years in the making so far, with lots of challenges encountered along the way, far more than any of the team had thought. Everything on the bike had to be designed and made from scratch, especially with such extreme levels of ‘every day’ power. The gearbox is a collaboration with Quaife that has taken over 2 years of designing and testing. (patent pending.) It is a small, strong compact gearbox offering 6 speeds, that counteracts the gyroscopic forces of the inline V8 with a reverse spinning clutch. The box is also combined with a very rare concentric swingarm design, with carefully designed anti-squat geometry, to reduce chain tension issues, a system proven on the world record MADMAX Turbine bike. It has swappable primary gears for different terminal speeds like a Moto-GP race bike,  but importantly prevents changes in the anti-squat geometry. This allows a smaller DRZ-530 chain to be used and not a far heavier 630 chain that would cause more friction and loss of horsepower. The bike will achieve its amazing power without any nitrous or turbo, but be naturally aspirated and, will breath through 8 independent Jenvy throttle bodies (ITB), controlled by a bespoke Motec M1 ECU offering full ‘ride by wire’, thus allowing ‘regular’ riders to feel the awesome power of the bike without spitting them off by using various menu controlled power maps. Customers can expect top speed and acceleration to be mind blowing and like nothing else, experienced outside of the best 500hp Hayabusa Turbo land speed racing or quarter mile drag bikes, yet at the ‘flick of a button’, be friendly enough to ride in town or the rain. For very experienced riders, there will be a special ‘red key’, that when activated, will allow full control of the bike without electronic intervention for insane acceleration and top speed – but only for the most experienced riders! A disclaimer will have to be signed for those that are given the ‘red key’.

Prototype 01 bike is under going continuous testing on our engine dyno and road testing to ensure the production bike is fit for purpose, especially in terms of clutch feel, handling, gearbox smoothness, ride-ability, engine cooling, etc…. Update 1: Elvington August 2015 – Land Speed Trials: The Eisenberg V8 made its first appearance with Rider Zef Eisenberg achieved 207mph in its first run, with the engine still being run in. The rest of the weekend, the bike performed many more runs, without issues. It was very well received.

Update 2: Prescott – 2016: The Eisenberg V8 with Rider Zef Eisenberg showed how the bike can navigate the tight, twisty hill of Prescott with ease. It was star of the show and well received.

Engineering was paused for over year to allow Zef Eisenberg the bike founder to recover from his infamous 230mph land speed crash on the MADMAX jet Turbine bike.

Update 3: July 2017 – Motorsport show: The MADMAX Paddock featured the Eisenberg V8 bike along with the best of the best in Guernsey. It was very popular and received keen interest from the biking and car community alike.

Update 4: 2018 – Considerable interest in the bike has been achieved, with people wanting to place a deposit. The bike will cost in excess of £100k and be built without compromise on quality, or specification. For those that want the world’s most crazy, high spec and powerful road legal motorbike, guaranteed to turn heads, the EISENBERG V8 will do just that.

Update 5: May 2019 – Phase 2: To allow the bike to reach limited production, there is considerable amounts of; legislation hurdles to climb over. We have teamed up with Prodrive, one of the UK’s most experienced motorsport engineering companies (that make the Aston Martin GT3 and GT4 race cars), to work on taking the bike to production stage and ensure that every part of the bike is fit for end users, as opposed to just being a ‘race bike’.  Full testing on safety, durability and duty cycles is now under way. The long road to production is getting shorter.

Update 6: Nov 2019 – Phase 2: The EISENBERG V8 bike has been nominated for the prestigious SIMMS award the RAC club. It has been placed in the centre of the RAC Rotunda to much shock and delight of the press and members. Substantial positive press around the world was received, with many surprised that a bike with this level of power and spec would make production.

Update 7: Dec 2019 – High levels of Electronic tech means high current draw at idle. A bespoke, ram air alternator was made to solve the problem. A lithium battery with 720 cranking amps allows instant starting of the bike. Full CFD analysis of the heat output and cooling effects of the bike from idle, to town driving to high speed riding has been done to allow three small radiators and twin fans to resolve all cooling issues up to those using the bike up to around 35c temperatures. A powerful motor requires a strong clutch. Good progress is being made to get the clutch feel/pull down to around 7/8kg, which is the norm for a ‘production’ bike. Customer interest has resulted in a discreet pillion seat to be made, along with sub-frame strengthening.

Update 8: Jan 2020 – The bike will go to Spain for some winter sun testing on the cooling and clutch solutions.

For further information on updates, PR, high res media photo’s, or getting your name on the waiting list…

please send us an email at: [email protected]

Note: MADMAX and EISENBERG are registered trademark held by Maxicorp Ltd
with the UK and EU patent office across numerous classes.